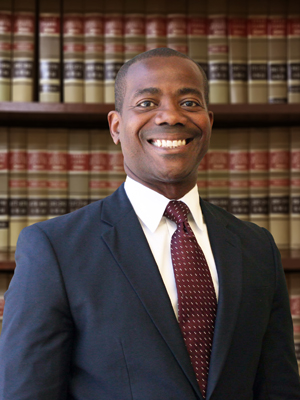 Introduction: Fyodor Clay is the senior associate at Abbott & Associates, where he represents workers’ compensation claimants in their efforts to obtain fair benefits and medical care after being injured on the job. Clay was born and raised in the Fort Hood, Texas area.

After graduating high school, Clay (as he is known by his clients) attended Auburn University where he earned his Bachelor of Arts degree in political science. Afterwards, Clay attended the Thurgood Marshall School of Law at Texas Southern University, graduating in 1999.

Following law school, Clay worked for the law firm of Adam Henderson in Houston, Texas, where he became a skilled workers’ compensation litigator, representing injured Texas workers. Clay joined our law firm in 2004, immediately establishing himself as a proactive and innovative member of our team. His success in hearings before the Texas Workers’ Compensation Division and his tireless advocacy on behalf of his clients earned him the award of Texas Super Lawyer four years in a row (2012 through 2015).

In 2010, Houston’s own H-Texas Magazine named Clay as one of “Texas’ Top Lawyers” for his successful workers’ compensation practice. A perennial client favorite, Clay continually sets the bar for building client relations and simply “being there” for those he represents.

In addition to being Father to his daughter, Madison, Clay is also a member of the Texas Young Lawyers Association, and the Texas State Bar Workers’ Compensation Section.